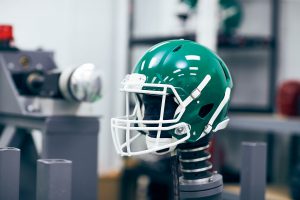 In addition, NOCSAE publishes guidelines which can be helpful to testing personnel, technicians, and manufacturers. Guides and guidelines are not a part of the standards and are not mandatory, but they do provide examples of testing and sampling procedures that would satisfy the requirements of the performance standards.

There are two levels of standards:

A “revision” to an existing standard is defined as a change in a critical test or performance parameter which could affect pass/fail outcome, including, but not limited to, changes to any of the following provisions: headform, characteristics, drop heights/velocities, environmental conditions, anvil and/or impact surface characteristics, Severity Index (SI) limits, pass/fail criteria, number of impacts, impact location, and instrumentation. Implementation of a revision requires a 2/3 vote of the Standards Committee.

Some confusion seems to exist with regard to the proper interpretation of the effective dates for standards that have been revised. For example, the NOCSAE document ND002-13m15 went into effect Oct. 31, 2015 and remained in effect until November 1, 2019.

The existence of a revised standard does not affect the certification of products already sold or in use.