The National Operating Committee on Standards for Athletic Equipment (NOCSAE) is an independent and nonprofit standards development body with the sole mission to enhance athletic safety through scientific research and the creation of performance standards for athletic equipment.

NOCSAE develops voluntary performance and test standards for athletic equipment that are available for adoption by any athletic regulatory body. Numerous national and international regulatory bodies for sports require NOCSAE standards, including the NFL, NCAA, National Federation of State High School Associations (NFHS), International Federation of American Football, USA Football, US Lacrosse and the United States Department of Defense Education Activity which oversees and regulates military base athletic programs for the children of military families around the world.

For more information, view how we function.

NOCSAE standards are created, revised and approved by the NOCSAE Standards Committee, which serves as a consensus body in accordance with the American National Standards Institute (ANSI) due process requirements for standards development bodies. The NOCSAE standard is an objective pass/fail standard, not a comparative standard. Interested parties are encouraged to submit comments, suggestions, objections or other responses to any standards under consideration or existing standards.

NOCSAE standards are constantly being updated to reflect the latest science, technology and medicine. 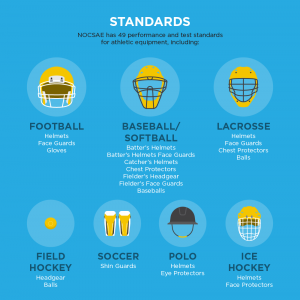 NOCSAE fosters and encourages the dissemination of information on research findings on athletic equipment, injury data, and other closely related areas of inquiry through the organizations represented on the NOCSAE Board of Directors, and other entities in the fields of athletic and sports medicine.

NOCSAE research efforts have also led to a better understanding of the mechanism and tolerance of head and neck injuries and more knowledge concerning the design and structure of football helmets, football face masks, batter’s and catcher’s helmets and lacrosse protective headgear and face masks.

NOCSAE is an independent, nonprofit 501(c)(3) organization funded primarily through licensing fees it charges to equipment manufacturers that want to have their equipment certified or recertified to NOCSAE standards.

Approximately 75 to 80 percent of all revenue collected from these license fees is reinvested into education and research to advance the science and safety of athletes. Manufacturers and reconditioners are obligated by contract license agreement with NOCSAE to maintain detailed quality control and quality assurance programs which include testing randomly selected helmets during production to make sure they meet the NOCSAE standards.

The makeup of the NOCSAE Standards Committee is inclusive of all materially affected interests that may be impacted by its standards. NOCSAE invites anyone who may be impacted by a standard to be involved in its development, including those who represent the sports and medical communities, manufacturers, parents and others. This openness and invitation to participation in the standards development process is intended to comply with ANSI due process guidelines.

NOCSAE® adheres to the ANSI Essential Requirements policy for the inclusion of patents in standards. This policy and related procedures and provisions can be viewed at https://www.ansi.org/essentialrequirements/.

A. Patent. A patent is a property right granted by the government to inventors of new and useful inventions. Patents may be granted on any new and useful process, machine, manufactured article, composition of matter, or any new and useful improvements thereof. During a patent’s limited term, its owner has the right to exclude others from making, using, selling, offering for sale or importing the patented invention into the United States.

From time to time it may become necessary to include a reference or requirement to use a patented process or item in a NOCSAE® standard.  When that happens, NOCSAE® does not claim any interest in such patent, and will obtain where possible, permission from the patent holder to reference such process or item in the standard.